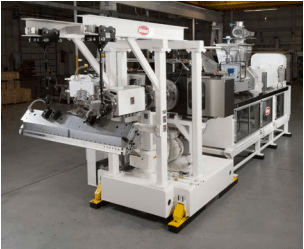 The first Welex Converge CTS™ sheet line is in production with a leading manufacturer of food service disposable ware, it was announced today by Graham Engineering, owner of the Welex brand. The sheet line directly feeds an inline thermoforming process.

The processor, a leading manufacturer of food service disposables, runs Ingeo® PLA resin from NatureWorks LLC at a rate of 3,500 lb. (1,590 kg) per hour and a temperature of 200 °C. “Welex Converge CTS runs at a temperature 25 to 50 °C less than we have experienced with Ingeo at these outputs with other processing technologies,” according to Jim Nangeroni, senior applications development for NatureWorks

“The lower temperatures possible with the Welex Converge CTS system lead to a reduction in molecular weight degradation, which in turn results not only in higher quality first-pass parts but also in sustained quality with post-industrial regrind,” said Mr. Nangeroni. “Processing with conventional technology, even under ideal conditions, you can expect 4% molecular weight loss per pass, comparable to polystyrene, but in our trial of the Welex system there was virtually no loss of molecular weight through eight passes, which is remarkable. This technology, combined with Ingeo pricing of $0.80-$1/lb. for standard extrusion/thermoforming grades, makes for a very competitive package.”

Based on co-rotating conical twin screw technology, the Welex Converge CTS sheet line processes PET and PLA with moisture content up to 2,500 ppm while eliminating the need to crystallize or pre-dry the material. Surface moisture is removed by means of a low vacuum applied at the feed area. After the 2 material is plasticized in the first stage of the extruder, there is a decompression section where a high vacuum is applied through a large vent to complete moisture removal.

“Melt temperature is pure energy, so a lower melt temperature saves the delta required to both heat and cool the polymer, in addition to that saved by eliminating the drying system,” said Mr. Nissel. “Altogether, this could amount to 25% less energy demand. At the same time, higher melt strength makes it easier to process the material, with less sagging at the nip and fewer surface blemishes. Less reformation of monomer minimizes plate-out on the polishing rolls. And lower temperature preserves color. Less yellowing due to heat eliminates the need for blue-tone masterbatch to compensate for color degradation.”

In addition to the processing benefits, mechanical and operating advantages cited by the company for the Welex Converge CTS system include: reduction of overall line length by about 20%, chiefly because the screws are half the length and weight of conventional parallel twin screws; faster screw removal, with almost no added clearance required, made possible by a pivoting barrel; and a large feed throat opening, providing the ability to add fillers without the added cost and complexity of side feeders.

For information on NatureWorks and Ingeo materials, visit http://www.natureworksllc.com.

The Graham Group acquired majority interest in American Kuhne in 2012, followed by Graham Engineering Corporation’s acquisition of Welex in June 2013. Together, Graham Engineering Corporation, American Kuhne, and Welex create a convergence of leading technologies, people, and capabilities in extrusion. Graham is a privately held company headquartered in York, Pennsylvania, USA.

Welex is the global standard in high performance sheet extrusion solutions, with over four decades of leadership. Welex solutions are installed in more than 3,000 customer locations in 69 countries. The company’s innovations include co-extrusion and multi-layer methods that lead the industry as well as dozens of barrier lines installed globally. Visit www.welex.com.